By AmCham  Published On 17/05/2021
Best mental health practices, activities, and programmes during the pandemic were showcased by Suzana čorđević, Director of the Hemofarm Foundation; Tatjana Jovanović, Senior Human Resources Director at Hemofarm; Ivana Vukić, Internal Communications, Culture, and Engagement Lead at PepsiCo; Sonja Jovanović, HR Director at Ernst&Young; Jovana Ivanović, HR Manager at Coca-Cola; and Dragomir Kojić, Senior Director at Karanović & Partners. The panel was moderated by Ivana Karanović, Vice-Chair of the AmCham HR Forum.
Suzana čorđević of the Hemofarm Foundation presented Hemofarm’s initiatives aimed at promoting and safeguarding public health and enhancing the quality of life in local communities. The first programme the Foundation undertook was Na kafi sa psihologom (‘A cup of coffee with a psychologist’), and more similar efforts followed during the pandemic. The organisation is currently engaged in a new campaign, Nesalomivi (‘The Unbreakables’), whose goal is to support the general public not just during the Covid-19 pandemic, but also in the ongoing mental health crisis. Alarming levels of anxiety and depression have been recorded, both in Serbia and globally, due to concerns over health and economic and social security. Nesalomivi is a support network and a movement against depression.
Tatjana Jovanović, of Hemofarm, spoke about Zajedno možemo sve (‘Together we can do anything’), an ongoing initiative the pharmaceutical company launched in 2020 to help staff cope with the problems of today’s world. Many corporate employees, both in Serbia and worldwide, were under a great deal of pressure, Ms Jovanović said, adding that companies ought to play a major role in supporting their staff. Caring for mental health matters, and the pandemic has upended both personal and professional lives, which is why Zajedno možemo sve intends to send the message that ‘you are not alone’.
Ivana Vukić of PepsiCo pointed out company’s practices designed to help safeguard mental health. She noted the key role played by HR, which was tasked, especially in crisis situations, with providing a ‘safe haven’ for all staff. PepsiCo has organised a psychological support scheme for its employees that includes a helpline where staff could book one-on-one sessions with psychotherapists, as well as webinars.
Ernst&Young was represented by Sonja Jovanović, who highlighted the importance of a company’s top management support for initiatives designed to provide care for staff. Ernst&Young has been dealing with mental health issues for some time, she noted, but the pandemic accelerated its efforts in this regard. The company has developed a website that can be accessed by employees as both individuals and team leaders. She added that each initiative aimed at allowing the company’s employees to be better for both themselves and their environment.
Jovana Ivanović of Coca-Cola HBC presented the firm’s global anonymous Employee Assistance Programme, envisaged as a 24/7 source of support for physical and mental health and addictions. Other Coca-Cola HBC initiatives have entailed raising awareness of mental health and helping staff mature emotionally. One programme, Novi ja za novo sutra (‘New me for a new tomorrow’) included staff providing peer-to-peer counselling where they shared their experiences with achieving mental health.
Speaking for Karanović& Partners, Dragomir Kojić described the issues faced by staff even before the pandemic, including stress, striving for perfection, and burnout. The pandemic has heightened the stressful aspects of work and removed the benefits of working in an office, such as close social relationships with co-workers and the like. Nevertheless, Mr Kojić added, the crisis has had its positive effects, although they are often overlooked. ‘The pandemic has allowed us to reset our business minds’, Kojić concluded.
At the end of the event, all participants answered two questions about key challenges with mental health identified by their companies, as well as the key issues for discussion at future AmCham HR Forum sessions.
Click here to watch video of the panel discussion (in Serbian). 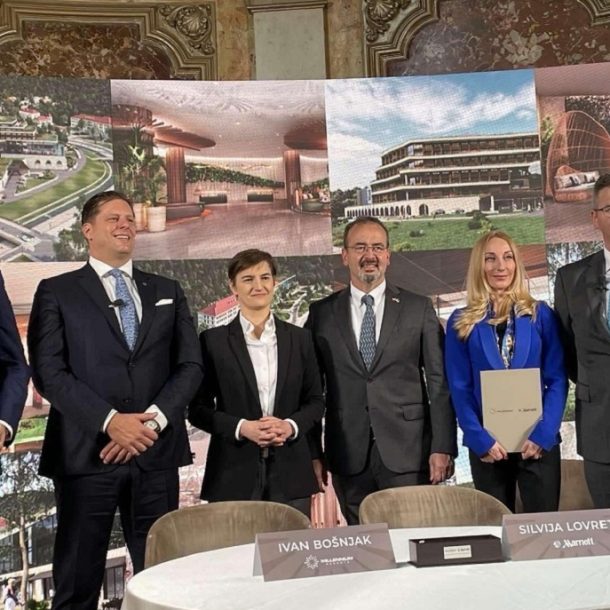 Marriot International to build resort in Serbia
Next Article